After all, what could be more liberating than being your true self?

Without Tumblr and the freedom to express myself freely on the internet, I don’t know that I would have an outlet to express myself in the way I want. I solidified my transgender identity on Tumblr and I continue to explore my gender identity. In addition to that, I can freely express my sexuality and I am proud of my sexuality- cuz I can face it now, I AM GAY AS HELL! (How I fooled myself or thought otherwise is beyond me!)

The clearest example of me being okay with being gay is the rainbow bracelet I have on my wrist with the words pride on it- a year ago there is no way in hell I would have had the balls to wear this!

I can honestly say that in the past 3 months Tumblr has helped me immensely in terms of exploring my gender identity and where I fall on the transgender spectrum.

You are probably sitting there thinking, what the hell is this person talking about? How can some dumb-ass website where people share pictures of cats and Taylor Swift change someones life in a profound way, let alone allow them express and explore their sexuality AND decide they are TRANS??  Well, the simple and perhaps obvious answer is because of the anonymity! Tumblr has given me ( and millions of other people around the world) the courage to post whatever I like. I have 430 followers on Tumblr and not a single soul on that site do I actually know in real life! Which is funny, because in some aspects, I am more honest and myself on Tumblr than I am in real life- which is the whole point of this entry! I refuse to share my username with people in my life life ( not that anyone has asked anyway) because it is my sacred space despite being available to the masses and the fact that I gain new followers on a daily basis!

I have to give some serious credit to Swedish sex-pot model, Erika Linder. If it were not for her, I

A)I would not be where I am in terms of my understanding of my gender identity,thus I would B) not even be writing this article in the first place!

Erika is an androgynous model, meaning she has the unique gift of being able to fluidly transition from male to female while she models. So sometimes she is hired as a male model (which is when she is THE SEXIEST PERSON IN THE ENTIRE FUCKING WORLD!!!) and she is also hired as a female model. Because of her beauty and androgyny, little ole me was sitting around a couple of months ago envious of this beautiful creature I peered at though my computer screen. How could someone so beautiful be neither male or female but be the perfect mix of both?

My whole life I never felt like I fit into the box that society says a woman is supposed to fit in. I have always wondered and yearned to know what it would be like to feel comfortable dressing and looking the way a piece of me has ways felt inside, which is like a boy. It’s funny because lately I have looked back at pictures and old facebook status posts from high school and even farther back and noticed little “red flags” of me grappling with my gender. Little things like me wearing mens pants and declaring its “man pants Monday” when in reality, I wanted everyday to be man pants day! Or when I would wear boy short underwear because they were close to boxers, but still feminine enough that it was considered “normal.” So when I saw Erika Linder, this gorgeous woman with her short hair, her pouty face and expressive eyes flawlessly modeling male clothing, I thought to myself- wow, how great would it be to be androgynous! I should try to do something like that! What really inspired me the most however was Erika’s quote on her twitter that states “I have too much imagination to be just one gender” What a concept!

And so it began. A few days later On January 23, 2015 I went to cost cutters and paid $17 to cut 3 inches off of my hair and chopped it off to the point where my hair fell above my jaw line. I was happy- I looked like a boy in my eyes. Perhaps to the outside world I looked like a lesbian. Or maybe I just looked like a girl with short hair. Either way, I was happy, and that is what matters. A simple thing like cutting my hair was the beginning of what will continue to be a life long journey of self discovery!

After I cut my hair I stopped carrying around a purse, I decreed that purses were not for me and that I hated how feminine they were. So I switched to a “mens” wallet which in turn drastically changed the clothes that I began to wear. Because I no longer carried a purse, the pants I wore began to change because now I had to put my belongings in my pockets. I did not have to buy any new pants luckily but the way I wear my clothes in different now. My closet is a bit unbalanced between mens clothing and women- surprisingly a lot of the clothes that I have unpacked right now ( a lot of my clothes are in boxes because I moved a couple of moths ago) are mens. In my closet I have it divided between women and mens clothing depending on how I feel on a certain day, it is easy for me to pick an outfit. My mens clothes are darker in hues- dark blues, greens, reds, grey and blacks. And then on the other side I have 2 pink sweatshirts and a few other “girly” clothes.

Now you are probably like, what the fuck does ANY of this have to do with Tumblr? Everything my dear friend, everything! Without the help of the internet, youtube, Tumblr, books and articles I would not feel comfortable with who I am, let alone know HOW to define myself! In the age of the internet I feel I am able to freely express who I am. Whether that is a picture of a beautiful woman or a dog, I can post whatever the hell I want. I don’t have to be ashamed if I see a picture of a chicks ass or bangin’ bod and find that more attractive than a guys six pack abs.

I grew up in a predominantly white, upper-middle class, catholic, republican town where being gay is not talked about. I went to a catholic high school, where if you were gay you were closeted. I knew I wasn’t straight, or had an inkling back in middle school and was seriously questioning my sexuality by freshman year and throughout college. I finally came out to myself as bisexual when I was 18.

In the past few months, the internet has taught me that it is okay to be gay, but even more pertinent, it is okay to be transgender.  Remember how I just said being gay was not really discussed, well neither was being transgender. Let’s face it, a lot of people still don’t know what the term even means- which is fine, our time is coming! You see how I said “our?” I say “our” because I consider myself part of the transgender community– a label that not many people close to me know about and a label I am still getting used to. I heard about transgenderism back in high school and always knew that the label fit me, but pushed it away because it was too painful to face.

Youtube and Tumblr, more specifically demonstrated to me that being trans is okay! It taught me that being trans isn’t gross, abnormal, weird, psycho, nasty, immoral, disgusting or wrong. There are millions of Tumblr users and millions of trans people peppered all over the world. The fact that I am able to simply access and see real peoples stories and accounts of beings trans has been an indispensable resource for me. I am able to type in “ftm”, “trans”, “transgender” and thousands of posts will pop up! Whether it is pictures, videos texts posts, rants, hormone replacement updates- anything– it is all readily accessible and at my fingertips.

I never knew that there was a whole community out there for people that felt like me and they were facing the same questions and struggling with the same shit I am. The same everyday problems that cis people don’t have to think about. Questions like, how do I get my friends and family to call me by my chosen name? How do I bind properly and what is the best company to buy from? How do I even know if I am transgender???

I am happy that I feel I have found my place. I have a long way to go. But from the support of friends and family, and some of my Tumblr followers, I feel like I am on the right path- so thank you! So in the end, I guess this is a big thank you to the internet and a testament that good can come from the digital age that we live in. 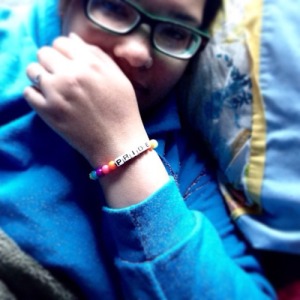